Andrew Klein is a first responder with the Santa Monica Fire Department in California. Marley, the dog, owes this man his life as Andrew refused to give up on him after pulling him from a burning home. 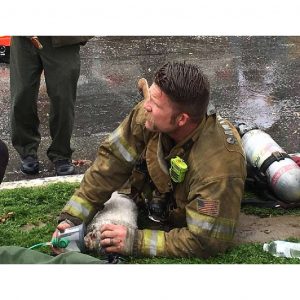 Firefighters raced to the scene around 4 p.m. and saw smoke billowing from the home in the Orange County neighborhood of Avalon Park, Orange County Fire Rescue said. By the time firefighters arrived, smoke was billowing from the empty home, according to a social network update from OCFire Rescue.
But while the home’s owner was safely away, firefighters knew animals might still be trapped in the burnt building. Those suspicions were confirmed when rescuers found a dog inside.
This was happening when first responders would help pets that were injured, car accidents, etc. Many are pet lovers themselves so after attending to their people patients, they would often provide aid to the injured pets on the scene.
“As I was standing outside, I saw the firefighter, Mr. Klein, running toward the curbside grass area carrying something,” Fernando told. “I didn’t know what it was at first, but then I realized that it was a pet who had been trapped in the fire. The dog was unconscious, limp, and not moving at all.” 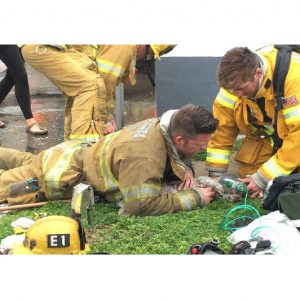 Andrew Klein did not leave the dog’s side. Just a minute after, he began performing CPR on the pet without any hesitation. Fernando said, adding: “It was an awe-inspiring moment.”
To everyone’s relief, after roughly 20 minutes, Andrew’s efforts paid off as the pet began to slowly move. 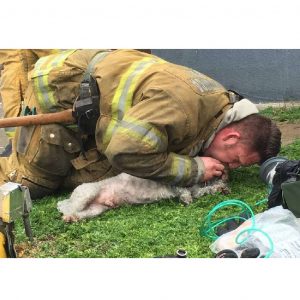 “It’s as if the big weight lifted off my chest. I was overwhelmed with joy and tears,” Fernando said. “I witnessed the dog come back to life.”
“The owner was in tears. Everyone was very happy with the ending. We are very proud of the efforts done by Andrew Klein from Santa Monica Fire Department,” Fernando said. “Firefighters have always been a role model for me, and I admire them deeply for what they do for the community. Being able to see this moment was really a privilege!” 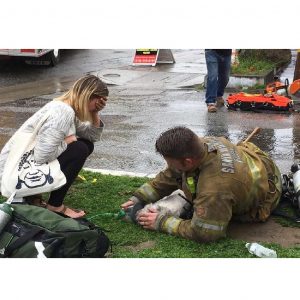 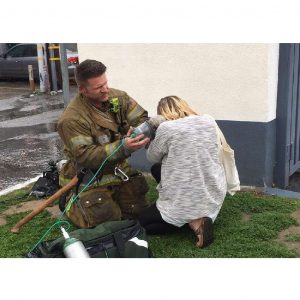 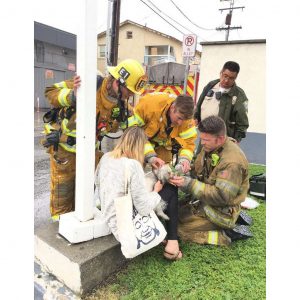