For most dogs the best part of the day is when they get to eat a delicious meal or play with their favorite toy. But for a 2-year-old Rottweiler puppy named “Daisy” there’s nothing more exciting than curling up next to his big brother and cuddling him to sleep every night. She is his shadow, says Brittany Troilo, Daisy’s mother. “She sleeps next to him every night.”

Daisy joined her family two years ago as a puppy and since then their home has been filled with love. When he first got there, the little dog immediately fell in love with his brother and hasn’t left him since. “She can’t have enough of him” 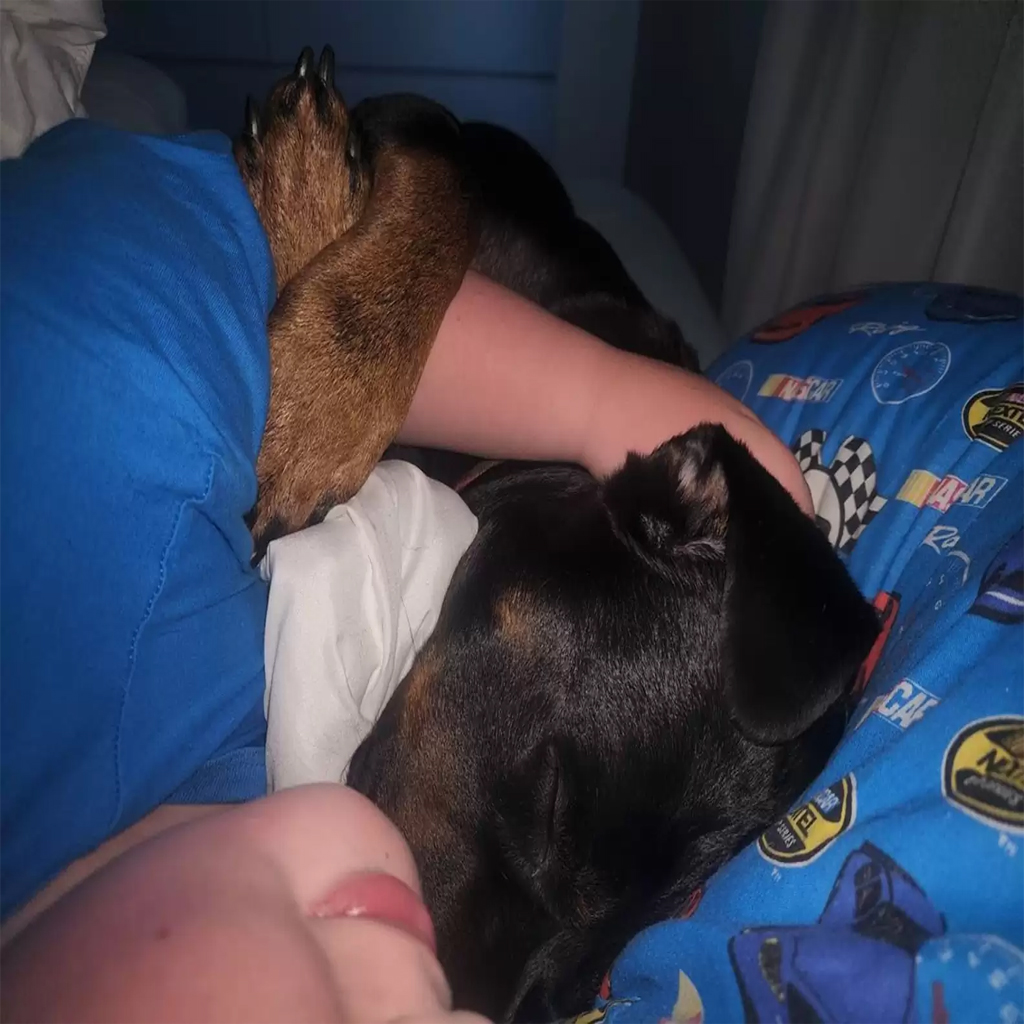 During the day, Daisy and her brother love to play tug of war with their toys and pick them up in the backyard. But the night is when the real fun begins. Right after the clock struck 8:30 pm. Every night, Daisy goes to the stairs and waits for her brother’s bedtime routine to begin.

“She will sit by the stairs and wait,” Troilo said. “As soon as we started going upstairs, she would jump into bed, wait for her brother to brush her teeth and then she knew it was cuddling time.” 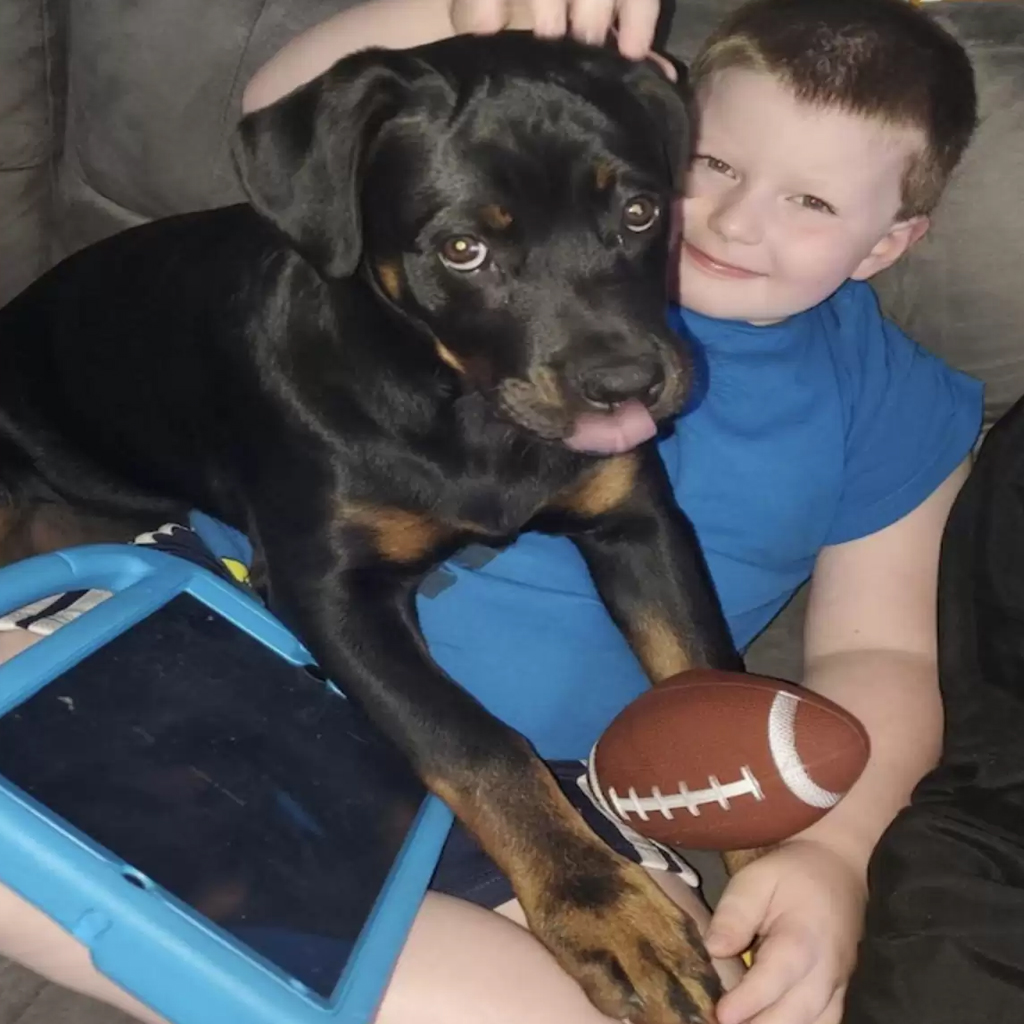 Later, when her brother was finally snuggled into bed, Daisy wrapped her arms around him and gently fell asleep.

Daisy would often spend the night cuddling her brother. But one night, Troilo wakes up at 2 a.m. to find Daisy sitting warily beside her bed, and she knows something is amiss.

“My son has type 1 diabetes and Daisy can tell he’s having an emergency even though she’s not trained to do it,” Troilo said. “Now, if his sugar is high or low in the middle of the night, she’ll come and wake me up so I can take care of him.” 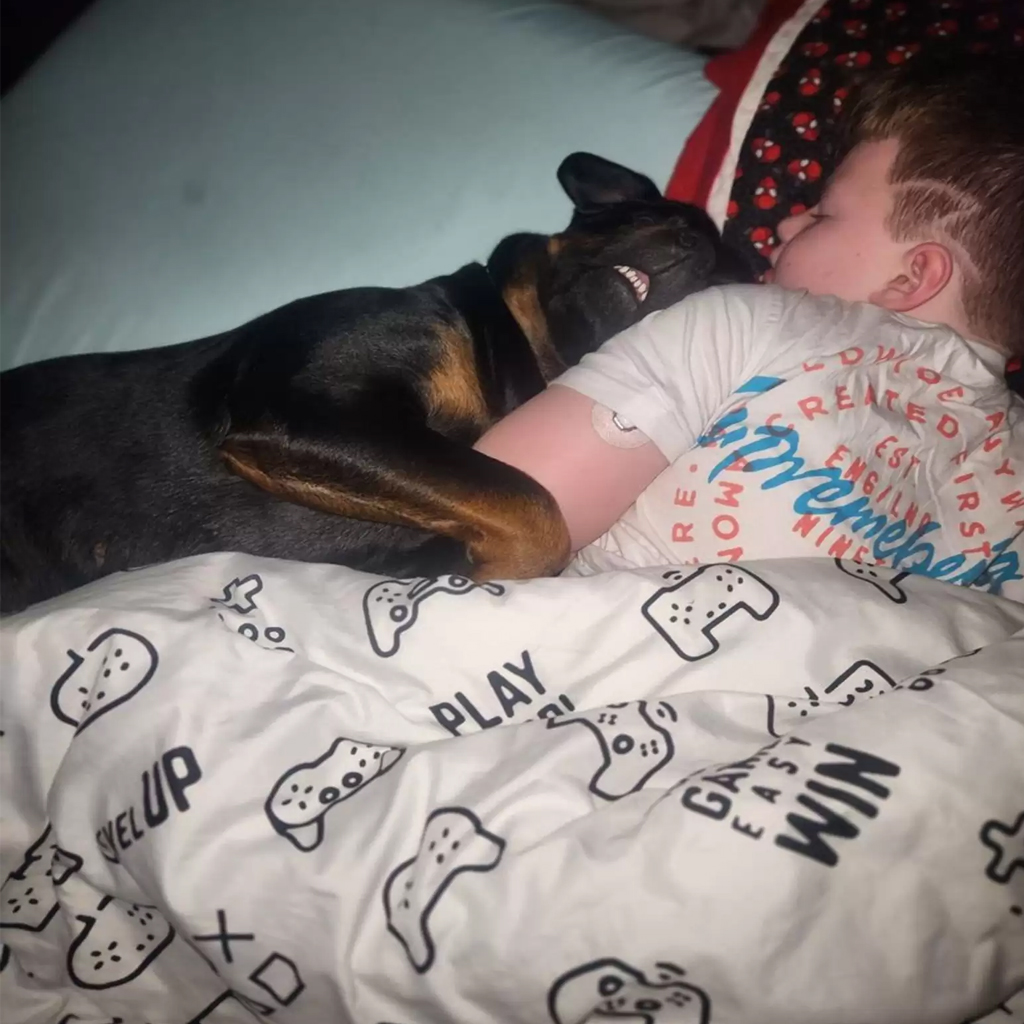 Not only is Daisy aware of her brother’s silent emergencies, but he’s also aware of the medical devices on his body like the Dexcom blood sugar monitor he uses at night. Dexcom plays an important role in keeping her brother safe as it monitors his sugar levels and alerts his parents if something is amiss. Somehow, Daisy knows not to touch her brother’s Dexcom, even while they’re sleeping. 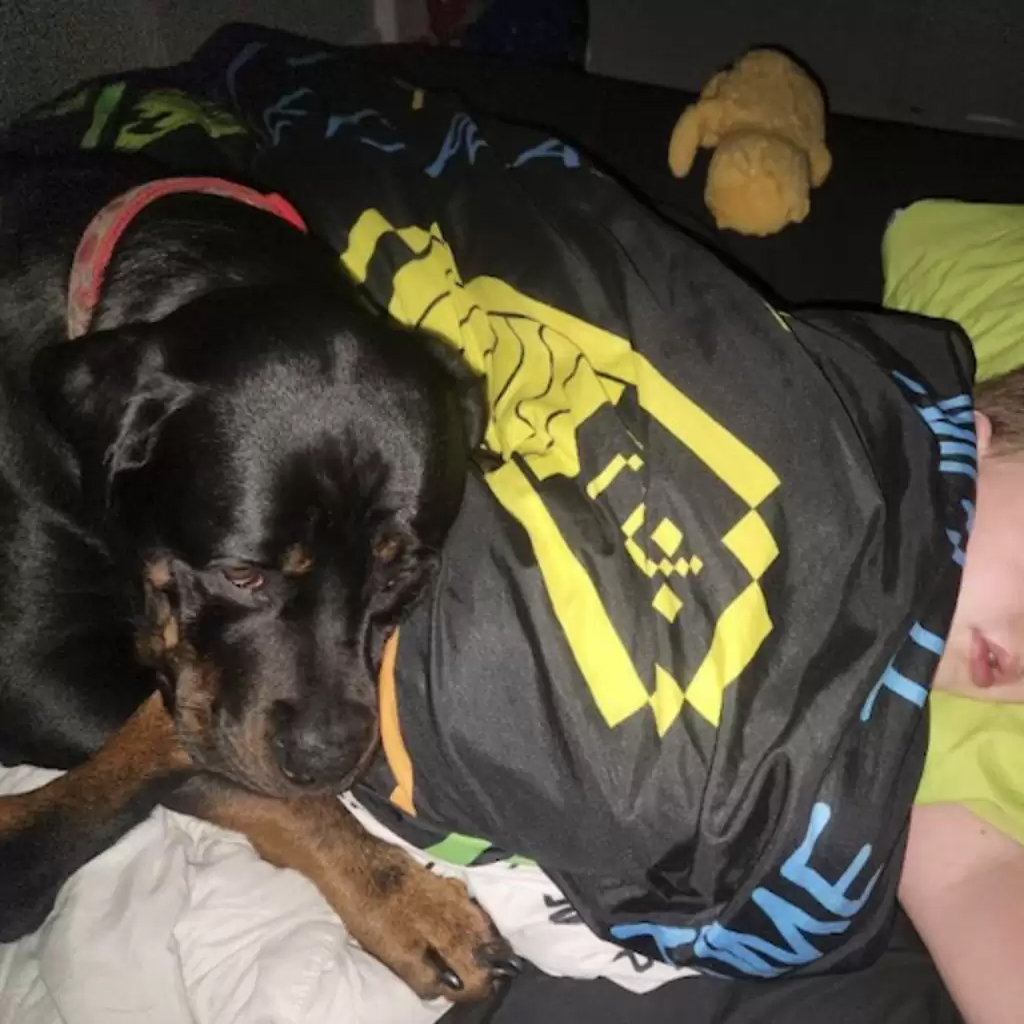 “She knows very well what it is,” said Troilo. “If it’s on his stomach, she won’t sleep on his stomach.” And, when Daisy wraps her arms around her brother to cuddle, she’ll make sure to stay away from the device. “She’s very smart, she’s a special girl.” 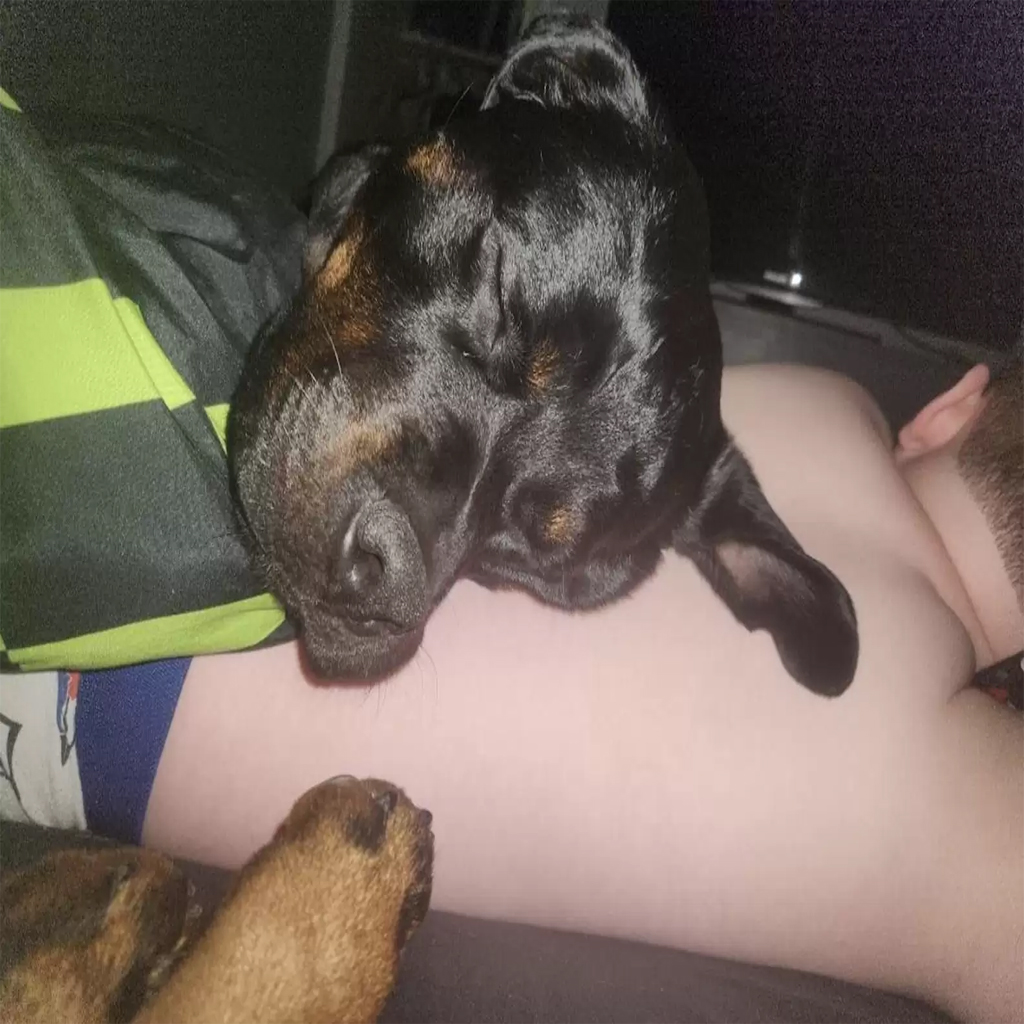 No matter what she’s up to, Daisy will drop everything to join her human brother in their nightly cuddle. 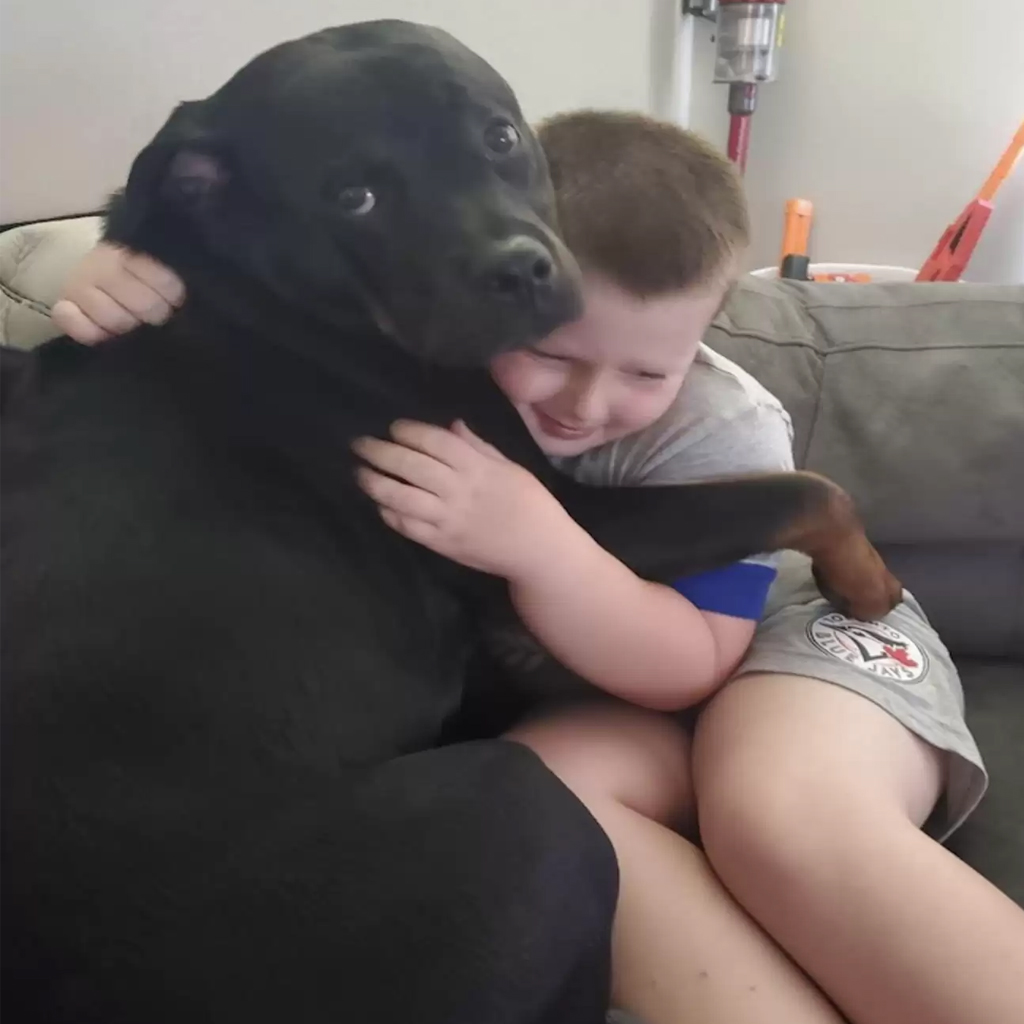 And in the morning, the sweet pup will wake up ready to enjoy the day, while counting down the moments until she can curl up in her brother’s bed and sleep with his arms around him Again.